History of the hoplite phalanx

The Perl Phalanx Project - History of the hoplite phalanx 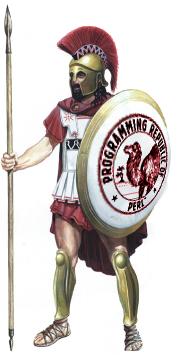 Men wear their helmets and their breastplates for their own needs, but they carry shields for the men of the entire line.

The hoplite phalanx was the perfect manifestation of classical Greek society on the battlefield. Made up of middle-class men who had day jobs, the phalanx was made to decide a war in a single bloody struggle.

The hoplite's armor--the panoply--consisted of a shield, helmet, breastplate, greaves (plate armor worn around the lower leg), sword, spear, and tunic, and weighed about seventy pounds. All this on a soldier who himself probably weighed no more than 150 pounds.

The hoplite's shield was his defining piece of equipment, even lending its name, hoplon, to the soldier himself. It was a large concave piece of wood, rested on the left shoulder, and stretching down to the soldier's knees. The shield was large enough to protect the right side of the man to each soldier's left, and so formed a wall behind which the hoplite was protected.

The rest of the armor was made of thick bronze plate, and was so heavy that the soldiers would not don their armor until the moments before the charge began. In particular, the helmet (always the soldier's least favorite bit of equipment, then as now) was frequently tilted far back on his head when the soldier was not in combat.

The phalanx is recognized by its bristle of spears, and the spear was indeed the principal offensive weapon of the hoplite. Eight feet long, it was capped with an iron spearhead on one end, and a bronze butt-spike on the other. There is some doubt as to whether it was held underhand or above the shoulder. The butt-spike was useful as a secondary weapon for dispatching trampled-upon foes, or as a primary weapon after the spear shattered, as it usually did, upon impact. The hoplite's short sword was typically considered to be a sort of weapon of last resort.

Each hoplite was responsible for the purchase and upkeep of his own armor, and so membership in the hoplite phalanx was restricted to those who could afford the expense. The title of hoplite was thus one of some minor prestige, and carried with it some additional political rights.

Hoplites were organized in the phalanx as row upon row of men, typically about eight ranks deep, and stretching abreast for a quarter mile or more. The commanding general--the strategos--took position in the front rank, at the extreme right--the most exposed position in the entire army. Greek generals typically had short careers.

Prior to combat, the paen or battle hymn was sung, then the phalanx advanced upon its foe at a trot. The Spartan army was an exception; it saw the paen as needless bravado and was known for its slow, methodical pace, set by musician-boys who marched behind the line. The first four ranks of men marched with spears level, while the rear ranks kept their spears mostly vertical, where they provided an effective defense against missile weapons. The large shields on the left side of each soldier provided an incentive for everyone to snuggle up against the man on his right. This formed the wall of shields that was so crucial to the phalanx's effectiveness, but there was a definite trend for each army to drift noticeably to its right.

As the lines neared each other, both sides broke into a run. The challenge for the general was to maintain cohesion (and the shield wall) while still gaining enough momentum for the initial crash. When the armies did crash, among the literal rain of spear splinters as the spears shattered, the battle became a scrum of each army trying to push through the other's line. The forward ranks did what hacking and spearing they could, while the rear ranks drove the enemy forward by pressing their shields into the backs of the men in front of them. The pressure, the noise, the confusion, the gore at the front of the line were immense.

The Greek phalanx was nearly unstoppable in its intended mode of combat: head-on, on straight, level ground, with adequate protection on the flanks. Hoplite battles frequently took place in long, straight valleys--so common in the Greek mainland--where the phalanx could occupy the entire width of the valley and thus protect its flanks and its rear. A single site would frequently be the location of battle after battle through the ages, its desirability as a battlefield undiminished.

Hoplite combat was centered around a single idea: that battle should be bloody, horrible, and decisive. This fit the needs of an agrarian society that could not spare its men to a professional army, but needed them back in time for harvest. Battles were short, and casualties were surprisingly low (proportionally to the combatants) in comparison with modern combat. Through most of their history, the ancient Greeks meant to keep wars short--even just a single battle--so that people combatuld get back to their lives. If they frequently judged war to be necessary, it was still just a necessary evil.

Most of this information comes straight out of

Also highly recommended, a novelization of the battle of Thermopylae: